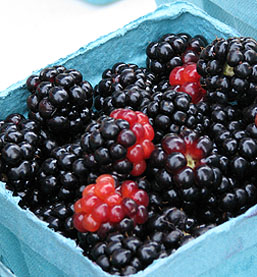 Apache Thornless Blackberry ripens 10 days or more later than the Arapaho Blackberry but earlier than Navaho around the end of June, early July.

The Apache Blackberry bush fruits are conical with glossy black coloring. Reports show Apache Thornless Blackberry's fruit to be larger than Arapaho or Navaho with eating and holding characteristics to be better than Arapaho but not quite as good as Navaho fruit. Canes of Apache Thornless Blackberry are more erect than other thornless varieties and can be grown without a trellis when primo canes are tipped at 42 inches to control primo cane length and encourage lateral shoot growth.

How to Grow Blackberry and Raspberry Plants

Add these products to your order