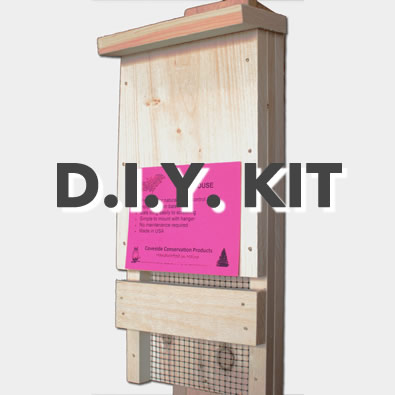 Disclaimer: All images are for reference only and may not represent the sizes of plants shipped.

Our Bat House Kit makes a great home project for your family. These bat habitat kits are made with rough-sawn Maine White Pine. The rough surface on the bat house kit gives the bats something to hang onto. Keep a couple of bat house kits on hand for a fun rainy day project with the kids. Bat houses are open at the bottom so birds will not nest in them and no cleaning is needed.

Help cut down mosquito and other bothersome insect populations around your house. One bat will eat hundreds of insects at each nightly feeding. So house a few bats in this small bat house. The Bat House Kit comes complete with echo-location slot and screening against the back.

Bat houses are a great addition to your backyard. Bats eat a large number of flying insect and are the main nighttime predator of mosquitoes. A single brown bat can eat between 600 and 1,200 mosquitoes an hour and a typical colony of big brown bats can protect local farmers from the costly attacks of 18 million root-worms each summer. Placing a bat house in your landscape or garden can help reduce your pesky insect population.

Bats are an extremely important part of our environment, yet are in serious decline because of a fungus. However, bats are one of humanity's most valuable allies in the fight against yard and garden pests and also in slowing the spread of insect-borne diseases.

Bats are not blind and are clean animals. They do not interfere with feeding backyard birds and will not be disrupted by pets or children. Bats are pollinators and do not tend to be agressive. Because bats are sensitive to pollution and pesticide levels, they are useful as a warning sign to potential environmental problems.

Bats can be important in combating insects that are actually dangerous to humans. With the increased media coverage of the deaths caused by the West Nile Virus, many people are looking for effective ways to prevent the spread of the disease. The West Nile Virus is primarily spread through mosquitoes and mosquitoes are a significant portion of a bat's diet. As previously stated, a small bat can capture more than 1,200 mosquitoes in a single hour! Bats cannot contract the West Nile Virus by eating infected mosquitoes. In addition to mosquitoes, bats can help control the populations of beetles, moths and leafhoppers. Even the very presence of bats in an area can reduce insect populations as many insects can hear bats up to 100 feet away and will keep their distance from areas occupied by bats.

The effectiveness of bats in some areas diminishes the need for pesticides, which will harm both the pests and their natural predators. Installing a bat house then is one of the most effective and environmentally friendly ways to reduce the mosquito population near your home. A bat house may be mounted on a tree, a pole without nearby obstructions, or a building. However, bat houses mounted on poles or buildings tend to have a slightly higher occupancy faster than those mounted on trees. For mounting on buildings, wood, stone or brick buildings are best; and your bat house should be mounted under the eaves with some sun exposure to protect it from rain while still allowing it to be heated by the sun. You should mount your house 15-20 feet above the ground where it will not be exposed to bright lights, the higher the house the greater the chance of attracting bats.

Read our article for more information and ideas on attracting bats.